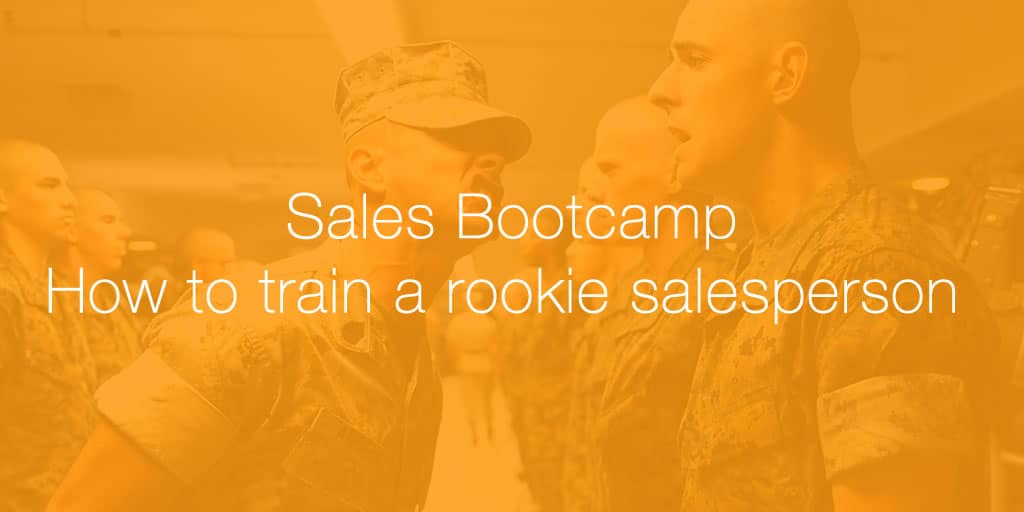 Sales Bootcamp: How to train a rookie salesperson

For the last 10 years Scott Leese, SVP of Sales at OutboundEngine, has been the guy that founders call to get a new company off the ground. “I’m the first two to three years guy,” says Leese. “I’m going to get you from zero to a $50 million valuation. That’s my niche.”

Leese has mainly worked in transactional sales environments, with entry-level salespeople, most of whom have less than two years of experience. A sales bootcamp if you please.

“There’s a lot of people who like to sit around and look at reports all day long and tweak little things here and there to optimize the sales process,“ he says. “I’d rather sit in a room and teach 24 year olds a little bit about life, a little bit about sales and watch them blossom.”

Leese tries to create an environment where people in their first or second sales role can develop personally and professionally. That doesn’t mean they get an easy ride.

“We purposely frontload the training process to be really intensive,” he says. “We put you through the ringer. Your hours are probably never going to be longer than they are in the first couple weeks.”

That means lots of rehearsal, role play and practice. There’s also homework, whether that’s listing the top three things you learnt today or listening to calls from veteran salespeople and figuring out what they do differently.

Leese pushes his new recruits to the limit for a reason. “If you’re going to quit, I’m trying to get you to quit as fast as possible,” he says. “Basically, I need to figure out if you lied to me during the interview process when you told me you want it so bad. Now, let’s see if when push comes to shove, you actually are that person.”

Admitting there’s a problem, however, isn’t enough. The prospect must see the value of solving that problem. “There’s so many functioning addicts,” says Leese. “They’re not about to lose their job or family yet so they don’t do anything about it.”

Only after the salesperson has demonstrated the value – why the prospect should care about the problem – will that prospect be receptive to hearing about the solution.

When Leese works with a new startup he figures out the perfect sales pitch for their product and then teaches that script to the rest of the team. Leese likens this to calling plays and having the sales team run them.

The same basic flow needs to happen in every call. A sales floor of 20 or 50 or 100 people can’t function efficiently if everybody is saying something different. But that still leaves plenty of space for individual interpretation.

“If you and I are writers in Hollywood, we’re going to hand the script to an actor and that actor’s job is to bring those words to life,” says Leese. “Your job is to take the words and learn the tone necessary, the cadence required. You need to learn when to raise your voice, when to bring it down and when to slow things down. All of that is salesmanship.”

Although Leese has a system, he doesn’t think sales can be entirely systemized. “People with an engineering background, they expect everything to be a perfect science and sales is not always a science, “ he says. “There’s an element of mysticism and faith and randomness.”