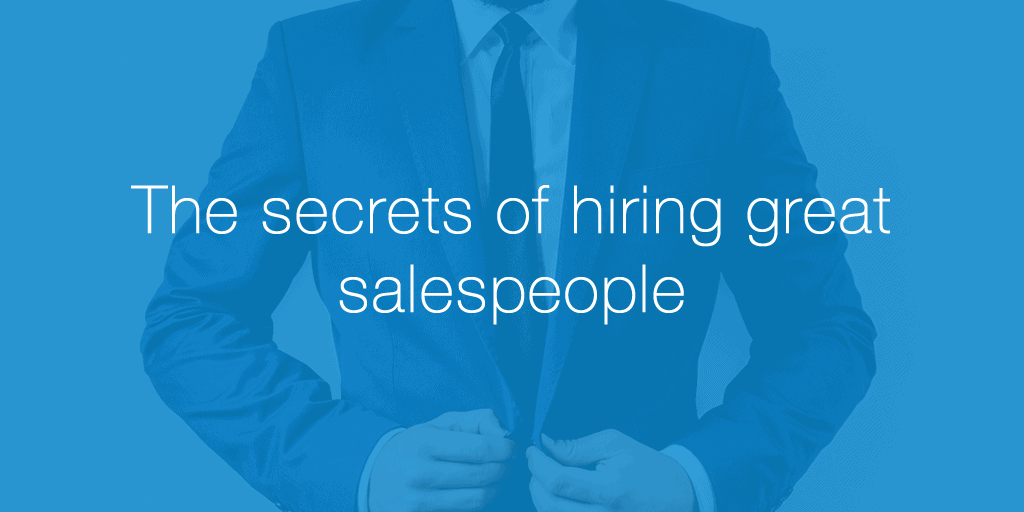 The secrets of hiring great salespeople

Scott Leese, SVP of Sales at OutboundEngine, came to sales at the relatively late age of 27. “When I was 23, I developed ulcerative colitis,” he says. “I spent the better part of the next four years of my life in the hospital dealing with it. I had a total colectomy so I have no large intestine at all.”

Leese’s illness gave him an unusual sense of urgency and drive. It also influenced which entry-level sales people he hires. “I’m willing to take chances on people who’ve been through some stuff, who have broken backgrounds, who have had a lot of problems before,” he says “Because a long time ago, somebody took a chance on me.”

“Hiring salespeople is tricky,” says Leese. “Salespeople, they’re going to be good at interviewing. We’re good talkers. We’re charming. We know how to say what you want to hear.”

Leese wants to understand why this person wants to be in sales. Why are you working so hard? Why do you want all that money? “Because if it’s a single guy who’s 25 and has no responsibilities and he wants to fly to Monte Carlo, “ says Leese. “That’s a different type of motivation from a single mom who is trying to get out of a halfway house.”

One of Leese’s favorite interview questions is how many alarms you set on your phone. The ideal answer is one.

“I believe in trying to create a no-margin-for-error situation for yourself,” he says. “Buy the most annoying, horrible sounding alarm clock. Put it on the other side of the room and train yourself for 21 days until it becomes a habit. Because otherwise you set yourself up for failure every single day.”

This isn’t just a personal alarm clock preference. Leese believes that night owls don’t make good salespeople. “I would rather have people who are up at four in the morning and are roaring and ready to go at 8am.”

He also asks candidates about the hardest experience of their lives and how they got through it. “I’m not really looking for the person who’s like, ‘Well, you know, going to university was really difficult… ‘ I’m just thinking to myself, ‘You’ve never even fucking lived or dealt with anything yet!’ That’s not really the person who’s going to be resilient enough to succeed here.”

The third rung on Leese’s sales interview ladder is demonstrating that you can convince somebody, that you can win an argument. He asks candidates to tell him about something that they consider true which most people believe is false. “I like to see what people come up and what kind of conviction they have behind their answer and how they spin it or try to sell it to me.”

In spite of all his experience, Leese still sometimes hires the wrong people or overlooks the right ones. “I’ve been fooled many times when I thought people were going to be amazing and they turned to be not good,” he says, “If you walk around my office right now the top 10 people have 10 different personalities and it can be infuriating. I can’t make a super soldier from my salespeople because none of these people are even remotely similar.”